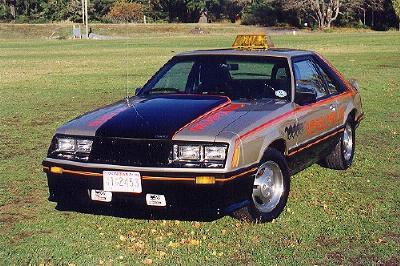 This Pace Car is one of only 405 that were designated for sale in Canada in 1979, and one of 185 of the Canadian cars that were assembled at Ford's San Jose plant. The 5.0/4-speed car was built on April 23, 1979, and was originally shipped to Dominion Motors in Vancouver, B.C.. It was originally sticker-priced at 11,927.30. Options on the car included the Premium Sound System, rear hatch wiper, leather-wrapped tilt steering wheel, interval wipers and a pop-up sunroof. This car has been wired (by a previous owner) to run a set of orange "pace lights" on the roof, so it could serve actual pace duties at a local circle track. A CD player and after market amps and speakers have been installed as well.

In July of 2002 the Pace Car went through a bit of a transformation. Having shown the car in stock condition since I bought it, I decided to "play" with the car for a little while. This went a little further than originally planned, but it’s all stuff that I can undo (all the original pieces are stored safely away), and it has made the car into a real little runner!! No track times yet, but I hope to get it out for some Ľ mile jaunts some day.
Since acquiring the car in 1998 I have done a LOT of detailing, rebuilt the motor, restored and detailed the engine bay, swapped in a T-5 tranmission and done some repainting and replaced a few of the decals. It is driven on nice-weather weekends as often as possible, and has won a number of trophies and awards at car shows in British Columbia and Northwest US.